This year saw the 80th anniversary of the first appearance of Batman, published March 30, 1939 in Detective Comics #27. Following right behind old Bats was the Clown Prince who would become his nemesis - The Joker first appeared the following year in Batman #1, published April 25, 1940. As villains go, you'd be hard pressed to find many as iconic and long-lived as the killer clown of Gotham - from his debut 79 years ago in which he was almost killed off to the upcoming feature film about him to be released in October, the Joker has been a pop cultural boogeyman who borders on the archetypal. This history is worth investigating, if only to give me an opportunity to be a fanboy for while.

One of the eeriest aspects of the Joker is conspicuous lack of information about him - although several backstories and identities have been devised for the character, it's much scarier and more fitting to his legacy that these remain potential origin stories, not definitive ones. In keeping with the multiplicity of the rogue's possible origins within the fictional world of DC Comics, the origin of and development of the character in pen and ink is ambiguous as well. For starters, up until recent years credit for Batman and associated characters had always gone solely to comic artist and writer Bob Kane; It's clear now that the development of Batman (and Joker) as we know them owe much to the contributions of writer Bill Finger, who now gets credited as a creator. One version of events has Finger and Jerry Robinson coming up with the iconic villain based on the picture of a jester on a joker playing card, while Kane maintained that he had been inspired to create a character by the terrifying visage of Conrad Veidt in the 1928 silent film The Man Who Laughs. 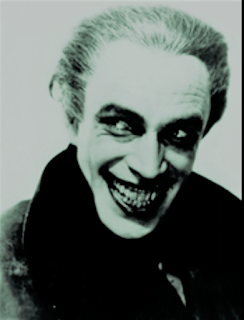 The Man Who Laughs is based on the novel by Victor Hugo, which features a carnival performer named Gwynplaine with a face disfigured into a permanent grin. It seems to be one of many tragic clown stories that were popular in the 19th century - it seems that when Ruggero Leoncavallo rose to notoriety with his opera Pagliacci he was sued for plagiarism by French author Catulle Mendes, who felt that the opera was too close to his story La Femme de Tabarin. He dropped his case when his play was compared with an earlier work by Don Manuel Tamayo y Baus. There's nothing new under the sun, I suppose, but the prevalence of dark tragic clown stories in the late 1800s is surprising to say the least. For Leoncavallo's part, he claimed ignorance to the works of Tamayo y Baus and Mendes, and claimed Pagliacci was based on a real murder. Whatever the case, it's an enduring opera that spawned films just as Hugo's grinning clown did - Notably Lon Chaney's eerie clown in the 1924 film Laugh, Clown, Laugh. That was Chaney's second clown performance - he was also a clown in the movie He Who Gets Slapped, based on a Russian play by Leonid Andrejev. It seems all around the world, clowns with violent and tragic backgrounds provide compelling stories, down through the ages...

The Joker in Batman stories is often portrayed in a similar way. One of the most iconic and controversial Joker tales is The Killing Joke, by Alan Moore and Brian Bolland. In it, the back story of the Joker is revealed - the Joker is a small time comedian who can barely pay the bills, with a wife and a baby on the way. One very bad day involving a heist in which he plays the part of the Red Hood, along with the death of his wife and unborn child culminates in his transformation into the clown prince of evil. This hearkens back to a 1951 origin story for the Joker reveals him to have been the Red Hood, planning to steal from the Ace Chemical plant but being foiled by Batman and falling into a chemical vat, which bleaches his skin and colors his hair green. The chemical bath is a consistent theme in the Joker backstory, memorably portrayed in 1989's Batman with Jack Nicholson in the role. Ultimately, any backstory given for the Joker is considered just a possibility "manifesting itself in his fevered brain", as Bolland put it in his afterword to the Deluxe Edition of The Killing Joke.

It seems the pale face, the grin, and the madness in clowning has all the hallmarks of menace. I covered this bit already as a lead-up to writing this analysis of the Joker - but it's interesting to note that all of the characteristics of clowns that the average person finds unsettling, the Joker has in spades. He's chaos and mayhem incarnate, an unpredictable, mysterious, and psychotic fiend who's seemingly capable of anything, as long as it amuses him. This is illustrated particularly well in one single panel of the Neil Gaiman and Andy Kubert story Batman: Whatever Happened to the Caped Crusader? 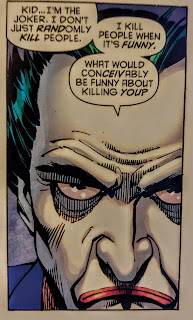 Also interesting to note is the fact that while he may have been inspired by Conrad Veidt's Gwynplaine in The Man Who Laughs, he has a distinctive gangster flair that makes him stand apart from tragic misunderstood European clowns of earlier times. That is, he may actually have been inspired by a simple jester image on a playing card - the Joker card, which is distinctly American. While playing cards trace their history back hundreds of years to China, then appearing in Europe in the 1300s, the addition of the jokers in the deck developed much later, during the American Civil War. In the game of Eucre, a game of trick card taking, an additional trump card or "Best Bower" was required - hence, the addition of the two cards to be used as wild cards. The American flavor of character traits displayed by the Joker is intrinsic to his personality and psychosis; the origin of the card seems a fitting allegory.

The earliest versions of the villain in Batman comics were violent and dark - the Joker was a homicidal maniac from the start. At the dawn of the Silver Age of comics, however, the violence had to be toned down considerably creating the more cartoonish, relatively harmless prankster version. Richard Widmark's performance as Tommy Udo in the 1947 film Kiss of Death is often compared to the Joker, and is not far from how the early Joker might have behaved. Uncited Wikipedia sources claim that Widmark based his character on the comic book Joker, and that Frank Gorshin based his 60s Riddler character on Widmark's Tommy Udo. Interesting, if true... 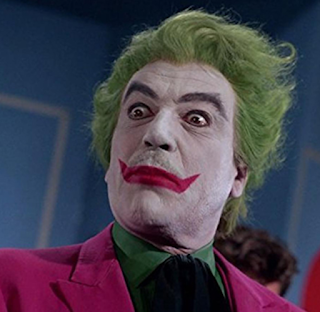 Of course, by the 1960s when the Batman series hit the air the Silver Age Joker was the standard. Cesar Romero's madcap adversary to Adam West and Burt Ward's Dynamic Duo was flamboyant, diabolical and entertaining - but certainly lighter fare than the killer of Batman #1. This "Theater of the Absurd" approach to the Gotham Rogue's Gallery is a particularly weird and wonderful one, as much as it may be dismissed by fans of the cerebral and terrifying Heath Ledger version from The Dark Knight. The aforementioned 1989 version, directed by Tim Burton, had Jack Nicholson needling between these two poles. He was certainly homicidal, but he was also pretty colorful and fun. Unpredictable and dangerous in the way only Jack Nicholson could be, 1989 Joker is the mean approximation of the sum total of the Joker's character. Nicholson said that the Joker "should have a humorous dark side to him", and that it was a part that he always thought he should play. This was in response to the Ledger Joker - Heath Ledger's final acting role, Jack seemed to find it heavy handed and too serious. I like both, honestly, for their own reasons. And of course I'd be remiss if I didn't mention Mark Hamill's voice-over work for the animated versions of the Joker, without which we wouldn't have the criminal's partner in crime Harley Quinn.

Worth noting as well are the Jokers that never were - apparently, Frank Sinatra had expressed interest in the role for the 60s TV series and was crushed that Romero beat him to it. As far as the '89 Joker goes, contenders for the role included David Bowie, Tim Curry, and Robin Williams. Williams was reportedly offered the role only to have it taken away and given to Nicholson, which upset him badly enough that he refused the role of the Riddler years later.

So there you have it - a good long look at an iconic bad guy, a clown who can creep with the best of them and the number one contender for the Caped Crusader. Happy 79th Birthday, you big weirdo.