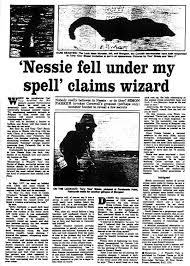 Tony 'Doc' Shiels is one of the most fun and colorful characters I've come across in all of my strange reading. And that's saying something! He seems to round all the bases of my various weird interests - first and foremost, as he would prefer according to interview segments I've read, the man is an artist - a Surrealist painter who came to call his conceptual continuity (to borrow a term from Zappa) works of "Surrealchemy". He has been a busker, musician and performer; a stage magician and the Wizard of the West; a trickster and a sincere lover of spectacle - but for the purposes of the Nessie-a-Day series, he's the man who coaxed the Loch Ness Monster out for a photo shoot! 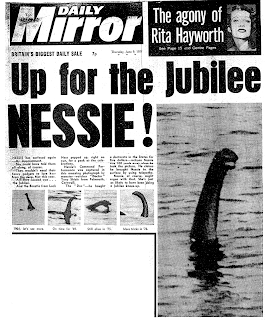 Tony Shiels was born in 1938 in Salford, where he developed an early affinity for sleight-of-hand and learned some tricks from his family. At age 16, he began attending Heatherly School of Fine Art in London, thereafter beginning a promising career as an artist in St. Ives, Cornwall. He played blues piano, performed magic, and generally had a good time in the counterculture scene. Eventually he would write columns in such magic magazines as Linking Ring and The Budget, developing what became known as "Bizarre Magic" - spookier magic tricks that worked in occult elements (ie card tricks utilizing Tarot cards) that broke the mold a bit for the tastes of stage magicians at the time.

All of this is very interesting to me - the blues, Surrealism, the occult, sleight-of-hand, 60s counterculture are all long-term fascinations of mine. But my introduction to the Doc included none of these details - I was drawn in by his appearance in a book called Alien Animals, by Janet and Colin Bord. 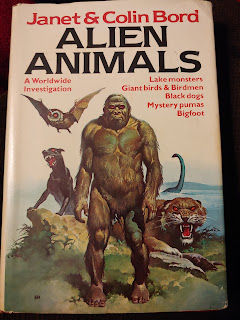 In the interest of fairness, I sought this book out after seeing a picture of it online - that cover art is FANTASTIC. As it happens, it's a great book that explores all manner of mysterious out-of-place (hence, alien) or unknown creatures from all over the world. Janet and Colin Bord have written many books on a variety of Fortean and folkloric topics, and are the stewards of the Fortean Picture Library. In a 2017 interview Janet credits Shiels' Nessie photo (printed in the Daily Mirror, shown above) for being the first of many that made up said library...

In the book, published in 1981, 'Doc' Shiels comes up repeatedly with very little explanation as to who he is - he's described as a Wizard, one who does experiments in "monster raising" with a trio of nude witches - an experiment that apparently yielded results. How could I do anything other than dig deeper into this story??? The photographic evidence seemed to indicate that his efforts were efficacious, leading the Bords to question whether the creatures were summoned, or created out of thin air in the manner of a Tulpa (as described by Alexandra David-Neel in Magic and Mystery in Tibet).
1976 was the year of the skyclad witches and their swimming rituals to lure in sea serpents - the monster Morgawr was reported during this time at Falmouth Bay in Cornwall. The Owlman of Mawnan was also reported around this time, and by '77 Shiels had developed his monster raising techniques into a network of participants, willing monsters into existence in an experiment called Monstermind. A lot of reports came out during this era, a lot of photos as well; Shiels gained a bit of notoriety (and perhaps infamy) in the press as the busking Wizard who had Nessie under his spell. Most of the photographic evidence from this era is considered a hoax now, and many of the reports were thought to be a product of Shiels himself - often they were in the form of a letter, and original witnesses weren't interviewed. Shiels maintains that he never hoaxed any of the monsters - his conjurations he credited, in 1981, to his "strong desire for success".

Interestingly, the Wikipedia entry for Shiels has been edited between the time I first viewed it and the time of this writing - last year, the entry seemed to be a damning indictment of Shiels as a fraud, while now it has a more generous and fuller account of his personality. If you're reading this in the future, it may have changed again! But such is the nature of our amorphous reality, when information is as malleable as a bunch of ones and zeros in a computational code...

The best way to really get to know 'Doc' Shiels is by reading the biography written about him by Rupert White - Monstermind: The Magical Life and Art of Tony 'Doc' Shiels.

The 1977 experiments were cut short due to "Psychic Backlash" - an effect reportedly experienced as a sense of fatigue following encounters with Nessie by F. W. Holiday and Tim Dinsdale, among others. That and, according to Shiels, it had already been a success as photos had been produced not only of Nessie but of other monsters around the world. The antidote to this backlash effect, as prescribed by the 'Doc' was, in keeping with his trickster nature: humor. The protection offered by a sense of humor, he says, "has to be paid for. So, although my humourous wizardry is successful, it is not taken seriously by the monster hunting establishment." Truly a man after my own heart!

He wrote continuously for the Fortean Times, as heavily quoted in my previous entry, in his column "Ask a Wizard". He eventually came up with a cephalopod theory about Nessie, that the monster was actually a form of elephant squid! 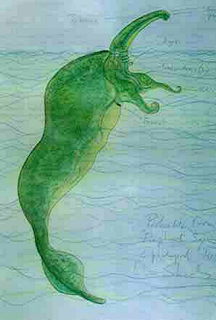 In his long and varied career of various careers - from monster-raiser to artist, musician to magician, he's been an amazing figure that it took me far too long to find out about. There's a list of books that he's authored that I someday hope to get my hands on... and he's still out there, creating art and has made television appearances in the past few years. Long live Tony Shiels- thanks for all the entertaining and thoughtful fun!
Posted by AP Strange at 3:17 AM