My presentation for the virtual conference Pan Paracon! I was very happy to be included and this talk was the last one in a great series, make sure to check out the other presentations and panels on that channel.

I did my best to present a nuanced view of art influencing reality, or perceived reality- and art imitating life as well as the reverse. Where does one end and the other begin? Is that even important?

Some Other Sphere Episode 11 - A Beginner's Guide to Discordianism

My first ever podcast appearance, host Rick Palmer was kind enough to have me on to talk about Discordianism, both its history and my personal experience with it. Hail Eris!

Some Other Sphere Episode 27 - Gorillas and Ghostly Gloves!

Rick was also kind enough to have me back on the show to talk about my own paranormal experiences, my involvement with Liminal Earth, and we had a wonderful unplanned but fun talk about gorillas.

On this show, I give Timothy Renner a rundown of a variety of weird experiences and paranormal happenings in my life, including but not limited to: a tarot reading from a ghost, jumping beef jerky, and dancing red lights.

Adam Sane and I had fun talking about all manner of weird Elvis stuff - The Elvis/UFO Connection, Elvis is Alive theories, and channeling Elvis with Hans Holzer.

The inimitable Stephanie Quick co-hosts this episode of Alexx Bollen's show, and we get into a wide-ranging discussion of Forteana, the role of hoaxes and trickery in the Phenomena, and other weirdness.

The Eternal Void, But With Jazz - A. P. Strange's Messages From the Cosmos

I talk about divination broadly, but more specifically how to apply a divinatory lens to your surroundings and intuit meaning from the seemingly mundane...

The Eternal Void, But With Jazz 30 - Stephanie Quick and AP Strange Leaning into the Phenomena

Stephanie and I discuss various approaches and reactions to paranormal phenomena, precipitating events such as synchronicity, weather magic, and communication with Space People. This was a fun talk and the respective lives of Stephanie and I both got real weird in the process of preparing it!

Fahrusha and I talk about the 1977 Broadcast Intrusion from Ashtar Galactic Command as well as other broadcast intrusions and events. Oddly enough there were several strange disruptions during the recording of this, including what she referred to as an EVP and also connectivity issues on my end. Odd!

Levi Athens of Appalachian Oddity and I had a rapid-fire discussion about all the weirdest stories we'd ever read, and pontificated on the nature of the Phenomena. It was a great time!

Chaos and Shadow INTERVIEW: AP Strange on #UFOTwitter and the weird!

Kyle and Pagan had me on to unpack some drama with Disclosure advocates on Twitter, sexism and other toxic social issues in the paraweird fields, as well as healthy ways to approach the Phenomena. The hosts of this show are an absolute joy to talk to and listen to. Check it out.

My two favorite witches SJ and Andrea had me on to talk about all manner of weirdness including Elvis stuff, dreams, synchronicities, and Messages From the Cosmos. Check out their other episodes because they do outstanding work, and have quite the weird story about haunted bricks and Mother Joseph.

Project Archivist Ep 352: Humor and the Paranormal with Steph and AP Strange

My good friend and fellow kook Stephanie Quick and I shared some wild ideas about humor and its role in paranormal events and the Occult. Roejen shared some tales as well, and we ran the gamut from banana vampires, Space Potatoes, pervy ghosts and the Magical Jobcat. A fun time was had by all!

Some Other Sphere Episode 71 - Christmas Weirdness and Festive Forteana

My third appearance on Some Other Sphere, this time to celebrate A Very Weird Xmas! I talk about Christmas UFOs, Santa Claus sightings, vampires, Jell-O shots, the esoteric meanings hidden in TV Christmas Specials, and more!

The Our Strange Skies Podcast Episode 85: The Abduction of Carl Higdon with AP Strange

It was a great joy to be a guest on Rob Kristoffersen's awesome podcast Our Strange Skies two weeks in a row! In the first one, we discussed the bizarre and oddly believable story of Carl Higdon and his abduction that occurred during an elk hunt. While preparing for this show, we went down a rabbit hole of sorts related to aliens seen wearing human outfits, and dug up enough Poorly Disguised Alien stories to do a second episode- Alien Incognito Mode! This also inspired me to do a bit of drawing... 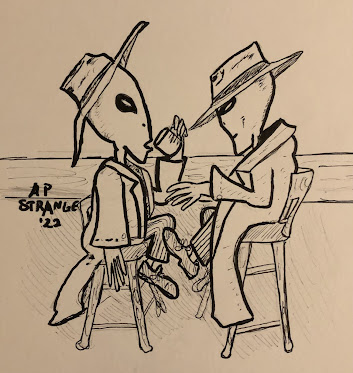 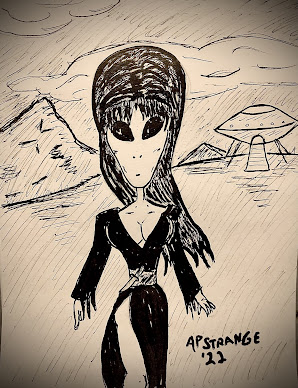 Tim and I cover a lot of ground here, closing out the Winter of Weirdness with style. Elvis stuff, Flat Earth stuff, aliens, clowns... we talk about it all!

Vanessa and I were plagued with technical difficulties during the recording of this, but after performing a bit of Hilarious Magick it was smooth sailing. We talked about donuts, UFOs, the importance of humor and playfulness, and a bit about Discordianism.

Our Strange Skies 110: The 1965-67 Series, Part 2: 1966, The Coming of the UFO Monsters with AP Strange
Rob Kristoffersen was kind enough to have me back on Our Strange Skies a third time, as part of his trilogy of episodes documenting American UFO stories from the mid sixties. We had some good laughs covering the year 1966... it's a long one, but a good one!
Where Did the Road Go? The Very Strange Experiences of AP Strange

I shared some of my personal experiences with Seriah, Chris Ernst, and Saxon aka Super Inframan and we had a wide-ranging chat concerning various other weird subjects. A fun time was had by all!

Where Did the Road Go? Alien Animals!

The book Alien Animals by Janet and Colin Bord had been mentioned during an earlier show, so in this episode I introduced the Bords to Super Inframan and Seriah and also shared stories and ideas from the book. The Bords were amazing and it was a pleasure to share their work on WDTRG!

In this show I talked to Vuk about one of my favorite magical things... Books! We wandered into a great many weird topics, including synchronicities in research, how to conjure hard-to-find books, Ashtar Galactic Command, and other weird things!

Todd Purse is a wonderful artist and gracious host, and it was a pleasure to talk to him about all manner of weirdness. This episode begins with some of my patented Donut Magic, and it only gets weirder from there! Also, I was honored to be the subject of one of Todd's art pieces! The Eternal Void, But With Jazz Hosting:

38 - AP Strange, Tim Boucher, and the Hunt for Greedo's Killer

I interview Tim Boucher about conspiracy theories and the malleability of reality, how things have changed with the advent of social media, and the disturbing possibility that George Lucas caused a timeline rift resulting in the Mandela Effect (herein renamed the MacClunkey Effect).

Maighdlin Kelly does some really interesting and great work creating natal charts for Fortean events and personalities, and when they suggested doing a show about the astrology of Ingo Swann I couldn't resist! We did our own little remote viewing experiment with this show, and got into some great and weird conversation about a variety of paranormal topics.

It was a spooky season treat to chat with Shane McClelland about ghosts, investigation, and inclusivity in the paranormal world. I'm a big fan of the show he does with Lori Gum, The Q Files - so if you haven't already, check it out!

Claudia and I discuss liminality in Mexico, strange tales and the legend of la llarona, in contrast with popular depictions. We also discuss the Day of the Dead, and a bit of Mexican history as well as Claudia's own experiences.

The one and only Allen Greenfield joined Chelle and I to talk about his recently released book The Grail Within: The True Quest for the Holy Grail and the Western Sex Magick Tradition , and also wild tales of his days as a teen ufologist. He also sang. A bunch. We had a lot of laughs with Allen and I'm very grateful to have had the opportunity.

43 - Whibble About Dribble with StarDoG

A fun and fascinating conversation with our good friend StarDoG, who tells tales of strange vortices, the Bison conspiracy, the troubles with time travel, and the Curse of the Fire Demon. Many laughs were had fnord and many subjects covered.

Chelle and I had a great chat with Mortellus, that ranged from their stories about adventures for food in their carnie days to the Evil of Turkeys, weird history around food, and othersuch tangents. We did talk a bit about their yet-to-be released new book, and a bit about their first book Do I Have to Wear Black?

On this episode we talked with the power duo of Stephanie Quick and Professor WHAM about the concept of egregores, which led to a far-ranging discussion about a variety of human experiences and perceptions. In addition, WHAM shared some killer personal accounts.

I had a fun chat with Steph and Kiki - two of my favorite people to talk to - about dreams and synchronicity. It was fun for us and I hope you enjoy listening as well.