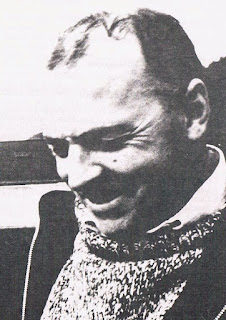 I thought it appropriate to begin my week of Nessie celebrations with a name I came across in every book that goes into the Loch Ness mystery, even slightly - Frederick William Holiday, known to his friends as Ted. He was a journalist and wrote books on fishing before his infatuation with the Loch Ness monster began in 1941, which culminated in a trilogy of books that chronicle his evolving opinions on the nature of the beastie. His adventures on the Loch in pursuit of the creature took him down a path of High Strangeness as well - he would, over time, become wrapped up in enigmas involving UFOs, synchronicity, and Men in Black!

His first book on the subject is "The Great Orm of Loch Ness", in which he posits that Nessie is a type of giant slug - an over-sized Tullimonstrum Gregarium, in fact. To me it's a sound theory; a long-necked veriform invertebrate thought to be extinct (and not nearly that large when it did live) could conceivably go undetected. Having no bones, it would leave no fossil record either. As materialist explanations go, it's a fine one... but Holiday soon got other ideas. For one thing, the monster seemed to know when a camera was present, and avoid having its picture taken, which Holiday ascribed to a possible telepathic sense Nessie possessed. Also possible was the idea that Nessie was a projection of human thought, an immaterial or supernatural creature. He brings together ideas of lake monsters, Flying Saucers, folklore and archaeological sites in his second book "The Dragon and the Disc", along with the beginnings of the idea that UFOs and lake monsters might have an underlying cause... which led ultimately to his posthumous book "The Goblin Universe".

It seems that Holiday, somewhere along the line, fell prey to the kind of maddening High Strangeness that other researchers like John Keel have. Colin Wilson, who wrote the introduction to and was responsible for the publishing of "The Goblin Universe" recounts much of Holiday's personal journey with the so called "phantom menagerie" in his book "Alien Dawn". Along the way, he did see Nessie, but couldn't get a picture; he encountered poltergeists and apparitions, and had several UFO sightings. He was present for the exorcism of the Loch by clergyman Rev. Donald Oman, and experienced strange precognative and synchronistic events in his search - which he ultimately ended up questioning the entirety of, with the convincing photographing evidence of Robert Rines appearing in his later years. The underwater photos - including the famous flipper photo - suggested that Nessie was a flesh-and-blood creature after all, bringing the whole crazy journey full circle, like a serpent biting its own tale, or a disc, perhaps.

"Synchronicity and the forces that control it never give up." This line appears in "The Goblin Universe", which Holiday had reservations about publishing. But it seems that Holiday also never gave up - he began writing another book much more in line with "The Great Orm of Loch Ness", and in the meantime collaborated with BUFORA investigator Randall Jones Pugh in writing "The Dyfed Enigma", which chronicled a bizarre flap of UFO activity in Wales. He includes in this book his comparison of ley lines with locations of sightings, building upon his Goblin Universe worldview - UFOs, ghostly black dogs, lake monsters and synchronicity - all things "neither physically solid nor organic in any known sense of the word" that we still yet encounter.

Ted Holiday died of a heart attack in 1979, leaving behind a legacy of weird ideas and haunting the margins of every anthology on the paranormal like a phantom from the Goblin menagerie. He's easily one of my favorite researchers on any weird topic, but then again, I'm biased with a predisposition toward anything Nessie related. Those who enjoy Keel would do well to track down Holiday's books, there are definite similarities in their work. Long live Nessie, and long live Ted!
Posted by AP Strange at 3:57 AM