As the Nessie-a-Day entries wind down, I thought it only appropriate to get back to that photo - the Surgeon's Photo, which inspired the series. This is the final entry, and I could go into the story of the hoaxing of the photo, but that can be found on innumerable websites in almost verbatim fashion. What strikes me in each case is that the same photo of "big game hunter Marmaduke Wetherell" appears every time - wide eyed, stationed behind a camera, with what appears to be a stuffed monkey sitting on it. 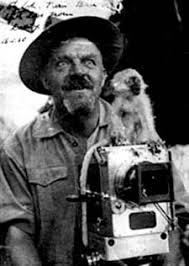 What a character he appears to be! For some reason, upon seeing it, my first thought was of the Abbott and Costello movie Africa Screams. As it happens, old Duke here was actually in the movies, so I guess my intuition was right on the money. An actor in silent movies filmed in England, he went on to direct with minimal success. He couldn't exactly be faulted for this - In the 1920's British films languished in comparison to the much more popular American movies, so much so that in 1924 many movie studios in the U.K. closed down. Ironically, one of the major stars of American films at the time was Charlie Chaplin - a Brit. Embedded is a Wetherell adaptation of Defoe's Robinson Crusoe, starring Marmaduke Wetherell.


With his movie career behind him, was he seeking new exploits? Was it his celebrity that prompted the Daily Mail to hire him to track down the beast? And furthermore, was he behind the hoax?

The story goes that he was humiliated after turning in tracks made by an ashtray or umbrella stand, which was made out of a hippopotamus foot, to the Natural History Museum. It's not clear whether he was fooled by a prank by someone else, or if he staged the prints, although some sources claim that the umbrella stand belonged to the Wetherell family. I'm not prepared to rule out an umbrella stand moving of its own volition down the beach... But surely a "big game hunter" estimating an animal so big as 25ft in length would understand that the weight of such an animal would create a deeper impression than a human hoaxer would manage. I'm dubious about whether he was a big game hunter at all - or if he just played one in the movies.

The film directing, acting, and producing angle does raise questions - was he there to put on a show? Was the Surgeon's Photo an example of early movie magic? Maybe he was naive enough to try to pass off a taxidermied hippo foot imprint for Nessie tracks, because in a movie it would have looked just fine. The first film appearance of a fictional Nessie, after all, was just a big iguana... fairly lackluster, I must say.

I'm sure someone has asked these same questions and perhaps got answers. With my self-imposed deadline of daily posts I have only managed to get the same limited info on M. A. Wetherell over and over again. Most of the information concerning a hoax attached to the photo comes from a 1975 Sunday Telegraph article with an admission from Marmaduke's son, (also an actor), explaining how the hoax was achieved with a toy submarine model. This was later found and expanded upon in the book Nessie-- The Surgeon's Photograph -- Exposed by David Martin and Alistair Boyd, a review of which can be found here. Perhaps reading that book in its entirety would help me suss some of this stuff out, but I rather like the illusion - shaken though it may be, like the disproportionate ripples on a miniature scene set adrift. True believers still maintain that the photo is genuine, and I'm generally open to possibilities. I sure hope that Nessie's out there, I still get excited about the idea of it. If nothing else she's given me a week straight of writing material, and that in itself is some manner of existence.

In closing, this week of Nessie posts has taken some turns that even I didn't expect, and if you took the whole ride I heartily thank you. You may now return to your significantly less weird life!
Posted by AP Strange at 3:33 AM