Clowns to the Left of Me, Joker to the Right... 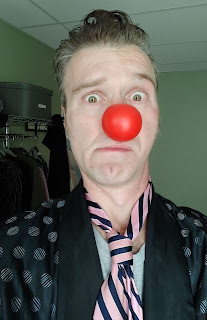 It's been a weird week, here at the headquarters of your humble Aficionado. I set out to write a nice little analysis of the Joker, of Batman comics fame, and got a bit sidetracked down a rabbit hole of research on the broad subject of clowns... it seems I opened a portal to the Clown Realm, inadvertently. Allow me to explain...

Firstly, I should establish here my personal thoughts on clowns. Growing up, I thought that coulrophobia was equal parts people who joked about fear of clowns, and people who were scarred by the TV miniseries It and its monstrous demon clown Pennywise. I never could relate to the fear of, or even the creep factor of clowns. To me, they're funny; a bit corny and outdated perhaps, but then again so am I. I have a fair amount of cartoons and art that I've drawn featuring clowns, and I'm sometimes dismayed when people think they're creepy. I have great respect for proper clowning as an art form, so if any clowns are reading this - I give you a 21 bicycle horn salute!

That being said, I set out to write about Joker, in anticipation of the anniversary of his first appearance in Batman #1 back in 1940. This triggered the idea for another post about the science behind creepiness with some Phantom Clowns thrown in for good measure. In the process I noticed a few clown synchronicities that I joked about on my Twitter account. Then they started to pile up... I wondered briefly if I should bother writing about this here on the blog late last night, and got an answer from the Clown Realm: 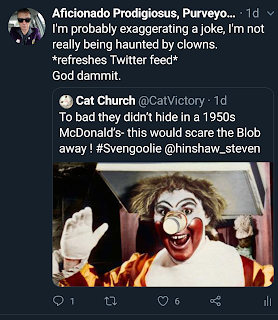 I started noticing odd coincidences in doing the research, in conjunction with the #OnThisDay posts I'm fond of doing on Twitter. Jack Nicholson (Joker in Batman, 1989) celebrated a birthday on the first day of really digging into the writing, April 22nd. April 23rd was the birthday of Ruggero Leoncavallo, the man behind the opera Pagliacci - which I was incorporating into a character analysis of the Clown Prince of Crime. On a whim, my creepiness entry included a picture of the creepiest smile I could think of - that of Mr. Sardonicus, the title character of a film by Gimmick King and thriller movie maker William Castle - and then found out Castle's birthday was April 24th.

On the 24th I had a moment of metaphysical hilarity in the form of greeting a woman at her place of work, only to have her ask - without glancing up from her smartphone - "Do you know where I could buy a clown car that leaves a trail of bubbles behind it?" I was a bit bewildered at first, and made sure she was actually talking about an actual clown car. I'm happy to say I think I managed to point her in the right direction, accomplishing my weird deed for the day.

My day-to-day life involves a lot of driving around, so I always make sure I have podcasts to listen to. One day last week, the episode of Aeon Byte Gnostic Radio that I was listening to ended with a discussion about world politics and this phrase - "Clowns run the world". The next day, I was listening to something a little less weird - WTF? with Marc Maron. Wouldn't you know it, during the opening neurotic rambling customary for his program, he read a fan letter - from a clown. The fan went into detail about the therapeutic benefits of Theatrical Clowning. Meanwhile I was in my truck saying to no one in particular "You've GOT to be kidding me!"

It didn't stop there, either, but it did seem to wind down a bit. The whole thing reminded me of an article I had read in an old issue of Fortean Times, by Bob Tarte and Bill Holm *, recounting his year of misadventure being plagued by synchronicity involving a clown named Bobo and the number 22. This sadly doesn't exist online anywhere where I can find it, but parts of it are included here for your perusal. Mr Tarte dealt with the nefarious and enigmatic Bobo for a full year - here's hoping I can avoid this fate and close the clown portal with this blog entry! Conspicuous is the fact that my first observed clown coincidence occurred on Nicholson's birthday - April 22nd...

Friday I went to the X-Filers United! Conference in Warwick, RI, and checked out Greg and Dana Newkirk's Traveling Museum of the Paranormal & Occult. Greg and Dana are every bit as cool as I suspected they'd be; very welcoming, kind, and easy going. I was thrilled to meet them!
I mentioned my clown synchronicities to them, for which I immediately felt a bit sheepish. But like I said, they're cool as Hell, and didn't seem to mind me continually coming back to linger at their museum and casually chat with them! The reason I mention any of this is that their collection included two items which caught my eye right away... 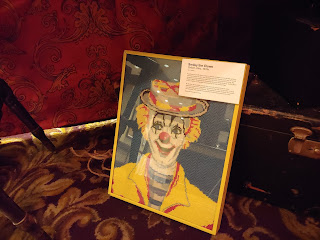 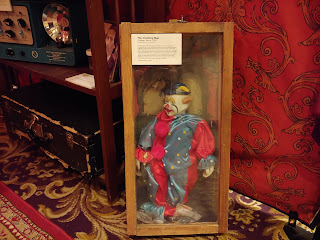 Each clown seemed to have a terrifying entity attached to it. Smiley, up top, terrorized college students with its attached "Dog-Eyed Humanoid" that would come out at night... While the clown below was found in a Chicago basement, wrapped in a picture of itself - this one seemed to make some skeletal creature that made cracking and popping noises manifest... Creepy stuff, indeed!

The traveling museum is really quite a wonderful collection of oddities and is worth going out of your way for. Every item inside was fascinating and wonderful. I spent a bit of time with a black scrying mirror, and was relieved that my reflection hadn't grown a clown nose...

That brings me to the weekend - of course I told my son about my clown troubles, which he found hilarious. Saturday afternoon the two of us were chatting with my mother through video chat, when she spontaneously put her phone down - only to pick it up again, surprising me by her and my dad wearing clown noses. Uncanny.

I also realized I had missed the series finale of the TV series Gotham, which aired on April 25th. I'm not sure if it was intentional on the part of the writers and producers of the show, but I suspect it was - that's the date of the anniversary of Joker's first appearance, the thing I set out to research and write about to begin with. And, fittingly enough, the episode - "The Beginning..." - revealed the Joker as we know and love him toward the end.

So now that this is all out there for the whole wide internet to chew on, hopefully these clowns can pile back into their phantom clown car and hit that cosmic freeway back to the Clown Realm from whence they came. I can close the Clown Portal and move forward, and write about something else next week. Anything else. Clowns never creeped me out before, but I gotta say they've been trying real hard this week!
* Bob Tarte has reached out to correct me on the attribution of his authorship of the article "A Circle of Clowns" from Fortean Times. He co-authored it with Bill Holm, who he says did the bulk of the writing. Weirdly enough, Holm also shared a birthday with Jack Nicholson - April 22nd! Bob is a real nice guy and the author of books such as Enslaved by Ducks and Kitty Cornered. Go check them out!
Posted by AP Strange at 3:53 AM