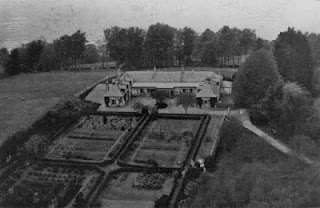 The Loch Ness Monster is many things to many people - to some, those perhaps with a tendency toward magical thought, Nessie may well be a dark entity or demon. As referenced in my previous entries, Ted Holiday came to believe that his Great Orm was something of another Goblin Universe, and was present for the exorcism of the Loch; Janet and Colin Bord postulated that 'Doc' Shiels' invocation rituals, as (intentionally) silly as they were, may have in fact created Tulpas - thought forms represented not only by Nessie, but by ABCs (Alien Big Cats), Black Dogs, and flying creatures. In Alien Animals, they note the proximity not only to Loch Ness but to a place called Boleskine House for a few major ABC events. Boleskine House was the scene of a legendary botched magick ritual by a young Aleister Crowley, who bought the estate in 1889. He had intended to call upon his Holy Guardian Angel, in a sacred ritual from the 1500s - the Sacred Ritual of Abramelin the Mage. The story goes that young Crowley summoned and then lost control of shadowy figures from Beyond, or that he abandoned his 6 month preparation program too soon - a full and well-written account of these events by Greg Newkirk can be found here, in a 2011 article for the wonderful Week in Weird website. But a lot has happened at Boleskine since 2011, and more has come to light regarding the rituals Crowley was engaged in.

The day of this writing, a BBC article appeared concerning Boleskine - that it is up for sale again. The house and property changed hands many times over the years, adding to the legend that Crowley's black magic had made it an evil place. Most notably, it was owned by Led Zeppelin guitarist Jimmy Page. In 2015, a fire broke out in the remote estate which reduced it nearly to rubble. Some would argue that the place was cursed, so a fire seems a fitting end to the building itself. But the question that is just too good and too weird to not ask is did Crowley conjure Nessie?

The Bords argue that although the modern phenomena of a monster in the Loch kicked off in 1933, stories of a monster went back centuries. Holiday also acknowledges tales of dragons, or Orm, in his second book The Dragon and the Disc. The ABCs occurring as a result of botched magical workings have precedent in occult literature - to King James I it was the Devil himself, choosing a form he liked - a lion, an ape, or a dog. The Ritual of Abramelin did involve calling forth evil entities, so the story goes, and bringing them under control after union with the Holy Guardian Angel. This is reportedly where Crowley ran into trouble.

Crowley was a complicated man who really divides people in opinion about him. Often thought of as a well-to-do kook who lived for infamy, he has just as many (or more) devotees, admirers, and people who respect and fear what he brought to the table. In addition to his aforementioned association with the Loch Ness monster, there's also his contacts with an inter dimensional being called "Lam", who seems eerily similar to our modern concept of Grey Aliens. In addition, I've noted before that his death was right around the time of the first major Flying Saucer flaps - 1947. Whatever your thoughts about Crowley might be, it's not unfair to say from an objective standpoint that his life was chaotic. Thus, it's not beyond the pale to blame him for a bungled ritual. But that might not be the whole story... 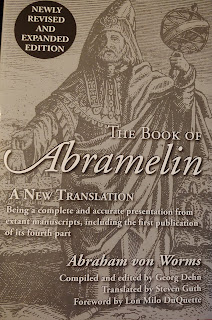 In recent years, a new translation of The Book of Abramelin has been released by Ibis Press. In 1897, S.L. MacGregor Mathers had translated the ritual from an incomplete French version of Abraham von Worms' original grimoire, and this would have been the version that Crowley brought with him to Boleskine House. Is it any wonder that his working would go sideways on him, if the book he was working with was translated from an unreliable source? In the foreword by Lon Milo DuQuette, he goes to great lengths to stress that Mathers actually did a great job of translating the French text - it's just that the French text did a poor job of translating from the original German. It seems an Erisian twist of fate that Crowley may have really done everything to the letter - but the letter itself was wrong! The famed 6 months of preparation, it turns out, should have been 18. It would seem that small discrepancies can do a lot of damage...

Also worth noting, in the spirit of Name Game synchromysticism - the Magician who authored The Book of Abramelin is called Abraham von Worms. Holiday referred to Nessie as an Orm, which can also by Worm or Wyrm in English folklore. Of course, "von Worms" as a moniker simply means that Abraham was from Worms, Germany - but that has synchronistic value as well. Worms is the setting for the first part of the Nibelungenlied, in addition to other German folktales tracing their roots to the Kingdom of the Burgundians in the the early 5th century. The legendary hero Sigurd, or Siegfried, is prominent in these tales. Siegfried is, of course, notable for having killed a dragon, before being murdered himself...

In closing, if anyone wants to loan me (or just give me, preferably) $650,000 to buy Boleskine House estate, I'll be your best friend!