Today's Nessie post is a bit of a mind-bender and one I probably put way much thought into. It involves a bit of the Fortean "Name Game", and plays on words from the old Fortean Times magazine, with a nod to cryptozoologist / author Loren Coleman's Twilight Language, which he defines as "the study of hidden meanings and synchronistic connections via onomatology (the study of names) and toponymy (study of place names)". And Mr. Coleman, if you're reading this, I apologize in advance for what may be a sloppy version of the work you do - and by no means do I wish to diminish it!

In the aforementioned Fortean Times issues, the game was "Lexi-Links", coined by Anthony Bell. It's the pun-like repetition and distortion of names and symbols linked to anomalous phenomena. And given the F. W. Holiday synchronicity alluded to in Nessie-a-Day #1, and all the ado given it's due, let's do the thing and proceed.

The "Surgeon" in question, who is allegedly took the photograph this series is celebrating, is often referred to in reports as a Dr. Wilson, or Kenneth Wilson, but the man's full name was Robert Kenneth Wilson. (It's likely to my mind that he preferred to go by "Kenneth".) Well as a devout Discordian (except every other Thursday, when I choose a religion randomly out of a hat to ascribe to) it's hard to see that name without thinking of Robert Anton Wilson, the author of  Illuminatus! and Episkopos, Pope and saint of Discordianism.

He was actually born Robert Edward Wilson, a year or so before the first major Nessie sightings. Technically, he earned a PhD in psychology from Paideia University in 1978 - making he, too, a doctor - but that particular university is now closed, and was unaccredited in the time he spent there. R.K. Wilson was a gynecologist, and was described as someone who "enjoyed a good practical joke" - The story behind the surgeon's photo is that it was staged by the nephew of the humiliated would-be monster hunter Marmaduke Wetherell, and given to Wilson who could play the role of a more reliable and unbiased witness. Compare this to R.A. Wilson, a notorious prankster who, along with popularizing Discordianism, was one of the driving forces behind Operation Mindfuck - which often involved prank letters printed in magazines and newspapers...

The two Dr. Roberts above made me think of the Beatles song from the 1966 album Revolver, which made me think of the "Mr. Wilson" reference in the song Taxman from the same album, which made me think of the hit single Yellow Submarine - which reminded me of the VIPERFISH, a mini-sub piloted by Dan Taylor in the Loch in 1969 in search of Nessie. The sub was yellow... I wasn't sure any of that was significant, but I tend to think that I'm an Idiosyncratic Synchromystic whether I admit it or not. So my thought is: Every particular thing is significant, except for those things that aren't. Looking into the recording details of the song Dr Robert, it was recorded on April 17, 1966, and the vocals were recorded April 19th - the 32nd anniversary of the shutter click heard round the world. Also worth noting - 1966 is the year Paul McCartney died, if you believe the Paul is Dead theories. I'm with RAW, who said "belief is the death of intelligence"... 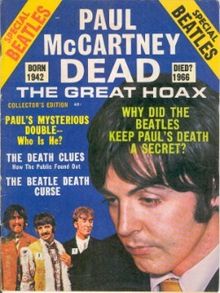 I'm not the first to note the confluence of Wilsons - self-proclaimed Wizard, Artist, and raconteur Tony "Doc" Shiels (who is intimately tied to Loch Ness - he famously "summoned" the monster and will absolutely be covered in a future post) wrote in the Autumn 1982 issue of Fortean Times:


'W' is the 23rd letter of the alphabet...twenty three skidoo, Weishaupt and Wilson! Wilson (viz: Robert Anton, Kenneth, and Colin) is a name with weird worm and wizardry associations, so we will keep it in mind:

Of course, he also includes Colin Wilson, who I mentioned in the F. W. Holiday post as being responsible for Holiday's The Goblin Universe being published - which examines the whole of weird phenomena as a network of otherwordly symptoms - synchronicity prominent among them - all having a common cause, or controlling force. The word "goblin" is thought by some to be associated with a later term, "gremlin", which brings me to the next Wilson on my list...

This Robert Wilson isn't a doctor, in fact, he's presented as a recently discharged patient. He goes by "Bob" instead of "Robert", and his other distinguishing characteristic is that he's entirely fictional. Bob Wilson is the name of the character played by William Shatner in the classic 1963 Twilight Zone (Twilight - Language, Zone!) episode Nightmare at 20,000 Feet. Wilson is on an airplane, alone in his awareness of the monstrous gremlin on the wing threatening to kill everyone aboard. It's a bizarre and truly nightmarish scenario, where the line between sanity and reality is unclear for everyone involved. It is, also, a great metaphor for monomaniacal pursuits of various Fortean phenomena - always seeing things or knowing things that you can't easily communicate to the average person, like a sighting of a lake monster, or spending a Saturday night deconstructing a Twilight Zone episode to make it relate to the Loch Ness Monster...

Eventually, the episode culminates in Wilson stealing a revolver (!) from a sleeping policeman and opening the emergency hatch to fire on the creature, which then departs. In the end, he's vindicated by the physical damage to the fuselage, but is wheeled away in a straightjacket all the same. In 1983, the story was done for the movie version of the Twilight Zone, with Jon Lithgow playing John Valentine. The only name I could relate this to was Michael Valentine of Stranger in a Strange Land by Heinlein, but I couldn't grok any real meaning out of it so I abandoned it. It's worth mentioning simply because it extends the Fortean metaphor; Valentine attempts, in desperation, to get a Polaroid photo of the gremlin, only to have the flash thwart him and leave him with a picture of his own sweaty, frenzied face - echoing Holiday's observation of Nessie's eerie aversion to being photographed... Deep, man...

The most recent offering from Jordan Peele, Nightmare at 30,000 Feet, is more of an homage to the classic story, and is quite different. I won't go into too much detail, as it's still new and I wouldn't want to spoil it, but the lead role is played by Adam Scott, and instead of Valentine or Wilson the character is named Justin Sanderson. Old school Forteans will recognize the name Sanderson - Ivan T. Sanderson wrote a great deal of literature on weird phenomena, as well as the foreword to Holiday's The Great Orm of Loch Ness... as for the name Scott - Sir Peter Scott was a respected naturalist who studied the Loch for signs of a hidden beastie and was the one who named her Nessiteras Rhombopteryx - Latin for Ness Dweller with a Diamond Shaped Fin. It was noted not long after that the term is also an anagram for "Monster Hoax by Sir Peter S". That may well just be the Goblin Universe having a bit of fun with us... Shiels notes that it also can be "Tony's ESP beats hex... Mirror" and that Scott is a name long associated with magic (Michael, Reginald, Sir Walter).

Of course, prior to Richard Matheson's fictional tale of a man on the wing made television history, there were reports of gremlins tinkering with planes. The phenomena is almost as old as aviation itself. During the Battle of Britain in 1940, reports of gremlins messing with aircraft were so common the Ministry had a service manual written by "Gremlorist" on how to handle them! 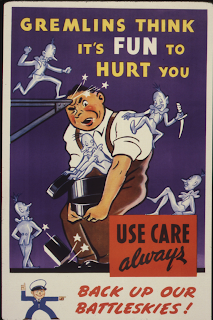 1940 began with a bang, or perhaps a splash - though not specifically gremlin related, a New Year's even training flight over Loch Ness resulted in a Wellington bomber sinking into the depths. The bomber was numbered N2980, but the nickname was - ready for it? R for Robert. The sunken WWII bomber was discovered in 1976 during the sonar surveys of the Loch, 230 ft below the surface. In the mid-eighties, efforts were conducted to retrieve the lost bomber by an organization called the Loch Ness Wellington Association, headed up by chairperson Robin Holmes.

Which brings us to our Nessie-a-Day #2 entry about the movie prop -from a Sherlock Holmes film- that was found twice during surveys of the Loch - the sunken monster, which was, in the movie, a submarine disguised as a monster, and was intentionally sunk at the end. The Private Life of Sherlock Holmes was a 1970 movie by Billy Wilder, while in 1975 Gene Wilder starred in The Adventures of Sherlock Holmes' Smarter Brother... The filming by Wilder on location at Urquhart Bay was in 1969, and was assisted by a submarine called the Pisces II, while the yellow submarine VIPERFISH was also in the Loch, hoping to catch a piece of Nessie... The same year Abbey Road was released, with the "28IF" license plate on the cover...

This is now degenerating as these things tend to do - this has been an exhausting post and I hope you made it this far. I'll leave you with one more snippet from Tony "Doc" Shiels, again from a Fortean Times magazine which also features articles from Loren Coleman and Robert Anton Wilson...

The names Conan Doyle, Sherlock Holmes and John Watson can be anagrammatized into such telegrammatic lines as "O NO! WHAT? JOHN KEEL LANDS COY LOCH NESS ORM!" or "JOKE ON LOCH NESS AND LOCAL MONSTER, OH, WHY?"

References / links / further reading:
Posted by AP Strange at 5:06 AM