Creeping into the Valley of the Uncanny

"The Uncanny Valley" is a term coined by Japanese roboticist Masahiro Mori, describing a sudden disorienting absence of familiarity that leads to a general feeling of eeriness and unease. It sounds poetic, not unlike Rod Serling's "between the pit of a man's fears, and the summit of his knowledge", but being a robot designer Mori illustrated the concept in a mathematical way - in the form of a graph. A sort of taken-for-granted, mundane acceptance of a given thing - in his studies, a human-like robot - can take a dive into the uncanny at the first failure of the robot to perform within the parameters of human expectations. His essay first appeared in a journal in 1970, and aimed to help robot designers avoid this reaction of repulsion; but perhaps the Uncanny Valley of Mori's aesthetic advice has applications within the myriad fields of the unexplained. In particular, it may well be a key to understanding the nebulous phenomena of High Strangeness.

An anecdote Mori uses to illustrate his point involves a robot designer who sought to make a man-like robot smile by carefully crafting its face with 29 muscles, as a human being has, but found that if it wasn't timed correctly the smile seemed unnatural and, well, creepy. Mr. Sardonicus, pictured above - the villain of the eponymous 1961 movie by William Castle - is the best example I can think of for a smile gone wrong. A smile is supposed to be a welcome expression of happiness, but out of context or done incorrectly a smile can incite abject terror. Reports of a mysterious being known as the Grinning Man illustrate the point rather well. According to witnesses, the Grinning Man is unusually tall, bald, and sports a horrible grin. No one knows who or what he is, and it seems no one has asked him - they usually are too busy running away!

But what if the anomalous entity is more subtle, as is often the way in cases of High Strangeness? Encounters with the Men in Black come to mind. At first, MiB might seem like well-dressed (albeit in an old fashioned way) normal people. It's usually their bizarre behavior that ends up giving them away. Sometimes they have unique physical attributes or move in odd, mechanical ways; and oftentimes, those who encounter the Men in Black are unable to account for their own reactions upon meeting these mysterious beings. The oft-cited example of Mary Hyre's encounter with an MiB in John Keel's The Mothman Prophecies is a good one to illustrate the point - the Man in Black was perplexed by the presence of a pen, as though he'd never seen one before. When told that he could have it, he cackled unnervingly and ran out the door. This sort of absurd interaction is par for the course with these strange beings, and naturally leave the witness in a state of bewilderment. Perhaps the bizarre behavior is part of a hypnosis technique called shock induction, when the victim of the (in this case) non-consensual manipulation is taken advantage of during a moment of shock, or danger... Keel wrote, in an article entitled The Sinister Men in Black for Fate Magazine:


All of the witnesses I have interviewed have told me they felt there was something inherently "evil" about these Men In Black --- something alien and dangerous. In a number of cases, people apparently have been drugged or hypnotized by the MIB and several have suffered amnesia and memory lapses after alleged face-to-face confrontations.

A 2016 study by evolutionary social psychologist Frank T. McAndrew explores the topography of that Uncanny Valley which can result from such things. Through surveying over one thousand participants it was found that unexpected behavior is a major trigger for feelings of creepiness. McAndrew posits that the eerie feeling we refer to as being "creeped out" serves an evolutionary purpose, to keep us on our toes in the presence of a potential, ambiguous threat. Unpredictable actions, particularly non-verbal ones, set off alarms that stop short of causing a fight or flight response - in fact, the opposite is often true, with the victim of creepy activity freezes, stuck with their own loathsome chills. Interestingly, men were more often considered creepy than women, and unusual physical characteristics aren't necessarily considered creepy - although they can exacerbate the creep factor of an already creepy person. Some hobbies or occupations are considered creepier than others. Can you guess what the creepiest occupation is? 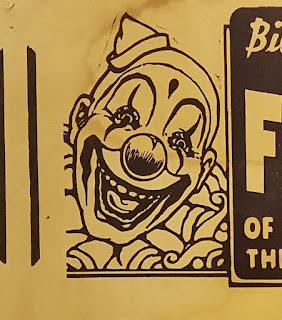 If you guessed Clown, you'd be correct. People HATE clowns. In McAndrews' article about his findings, he points out that the average clown is male, has outlandish physical attributes that can build upon already present feelings of unease, and due to the comical nature of the clown's profession he is by definition unpredictable. All together, these traits create a subconscious low-level threat alert, leading us to feel creeped out. A more extreme, irrational fear of clowns is a bit different - referred to as coulrophobia, it's usually trauma related.

Creepy clowns in horror movies such as IT's Pennywise or the real life serial killer John Wayne Gacy often cited as reasons for the prevalence of fear of clowns, but McAndrews' study gives more insightful reasons. Personally, I have no real problem with clowns, but then again I've never encountered the phantom variety that plagued the country in the spring of 1981. Loren Coleman wrote about them at the time, and his essay Phantom Clowns can be found in the Fate Magazine compilation The World's Strangest Stories. Beginning on May 6, in Boston, Massachusetts, and lasting less than two months - from Boston to Providence to Kansas City to Pittsburgh, reports of menacing clowns harassing children came in to the respective cities' police departments, but no one was ever arrested. It seems bizarre that such flamboyantly garbed perpetrators could abscond without being seen, but they seemed to always make a clean getaway. In Pittsburgh, a clown was even seen with accomplices in the form of Spiderman and someone in a bunny suit!

In a sense, the Phantom Clowns of the 80s and the MiB share a lot in common. They drive distinctive vehicles - Men in Black typically drive older model cars that appear brand new, black of course; Phantom Clowns seem to prefer full-sized vans replete with ladders... They both behave in strange, unpredictable ways. Indeed, their very presence in some cases is unexpected and frightening. Men in Black typically appear to witnesses of UFO or other odd events, playing upon an archetype of vague, yet menacing G-Man, while the Clowns seemed to prey on children and due to their general creepiness are well suited to shock anyone into an Uncanny Valley. More broadly, aspects of High Strangeness such as synchronicity make one feel as though they've dipped outside of a comfortable reality and into strange, unknown territory. There's a playfulness or mischief to the phenomena as well - a trickster element, for which the Phantom Clown or farcical antics of the MiB could well be totems for. Or perhaps there's a sort of psychological, shock induced hypnosis that produces in the cognition of the witness a panoply of perceived effects. Or possibly, it's some combination of all these things... perhaps the best you can do is laugh. 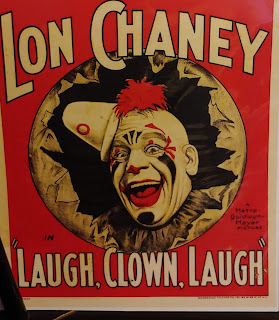