It's been 75 years since a man named Kenneth Arnold witnessed anomalous flying objects from the cockpit of his plane, and the ensuing media frenzy is often referred to as the beginning of the modern UFO era. Based on his report, newspapers soon coined a term that would become ubiquitous all over the world: Flying Saucer. And even though Arnold's report was of a craft that looked more like the Bat-arang than a spinning plate, people across the country started to come forward with their own stories of seeing these disks, saucers, and other "whatzits" in the air above their locales.

A lot of speculation and interpretation can be drawn from the above facts, and in the decades since hundreds of books, articles, podcasts, and other forms of media have followed these myriad lines of discussion. On this anniversary however, I thought it appropriate to touch on a story much closer to home, and encourage you to do the same.

I came across a reference to this story in the introduction to Isabel Davis and Ted Bloecher's Close Encounters at Kelly and Others of 1955, and the cited source was none other than the local paper here in Worcester, Massachusetts - The Worcester Telegram (currently the Telegram and Gazzette). There are a lot of great resources online for finding old magazine and newspaper articles, but often the smaller local papers only exist on microfilm. So one day, I went to the Worcester Public Library and tracked it down, and found other interesting things along the way!

The story referred to above involves a 70-year-old woman from Webster, Massachusetts, who saw a disk shaped object zip past her window before Arnold saw his 'saucers'... 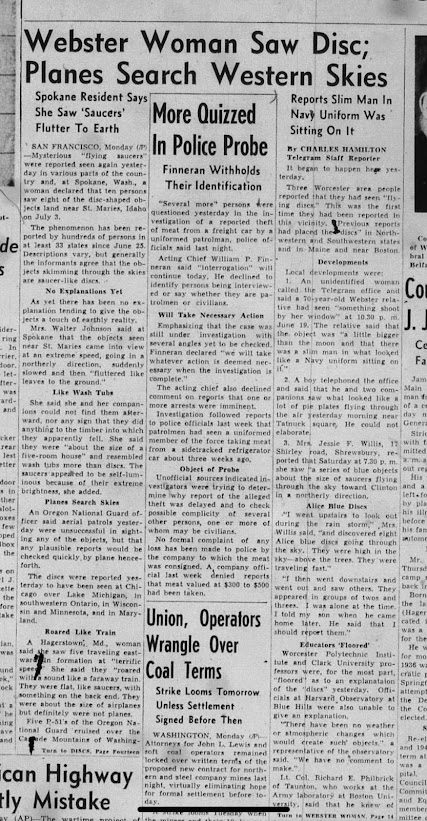 As you can see, terms like "Flying Disks" or "Discs" were being used interchangeably with "Saucers" at this point. The Webster UFO even features a slim man in what looked like a Navy uniform sitting on it! Other reports in the same article from locations familiar to me, like Tatnuck Square and Shrewsbury, are thrilling to read as they only seem distant in time- much less so in proximity.
Within a few days, even more reports came across the news desk:

These reports are mostly within the city of Worcester, and I have personal memories attached to many of the places referenced. It seems at this point that some of the reports were perhaps reaching a bit; I'm particularly amused by the bit about a man walking into a tree, because, being accident prone it sounds precisely like something I would do. Also interesting is the report of 6 'cups' flying over Commercial Street. If we're going to have Flying Saucers, why not Flying Cups?
So on this anniversary of Kenneth Arnold's sighting, I encourage you to go to your local library and inquire about the Local Flying Saucer Report from 1947. Any excuse to visit your library should be taken advantage of, and plus you'll get the bonus perk of a librarian thinking you're a big weirdo for looking for old flying saucer stories. Of course, you don't have to tell them, just start around late June of '47 and roll through the microfilm. I'm sure you'll find fun and interesting things, and the local setting will add a whole other dimension to zeitgeist of the era.
Happy Flying Saucer Hunting!
Posted by AP Strange at 8:47 PM