Forteana for a Froggy Evening

Frogs hold a special place in the annals of Forteana - Charles Fort documented cases of frogs falling from the sky in his book that started it all, The Book of the Damned. Among the many instances of "damned facts and evidence" he collected, the frogs were only one example of things falling from the sky that seemed impossible. These odd events provided him a great platform from which to lampoon the attempts of scientists to explain them away. The rational explanation usually involved a waterspout pulling aquatic or amphibious creatures from the water and depositing them with rainfall elsewhere; the animosity between the rational approach of scholars at the time and Fort's sarcastic material agnosticism is a hallmark of all manner of Fortean subjects to this day.

Other notable frogs within the weird fringe literature that can loosely be called Forteana are of course the Loveland Frogmen, who may not have even looked all that froggy at all. Various descriptions had been given for these odd creatures, which were reported in Ohio in the 50s, the 70s, and more recently - none of which matched the official explanation that someone's pet iguana had gotten loose, lost its tail, and was mistaken for a flying saucer occupant. Further, though not immediately evident of frogginess, there's the Hook Island Sea Monster photo. Evidence overwhelmingly suggests that this photo of an injured sea serpent is a hoax, but to this writer's eyes it looks like an enormous tadpole. Of course, such a tadpole would imply the existence of a Gargantuan Sea Frog. Imagine how large such a frog would be, how it would live, and what it would eat! We've now cast off from familiar shores out into the waters of pure imagination and conjecture, a place that might be requisite for appreciation of this blog. 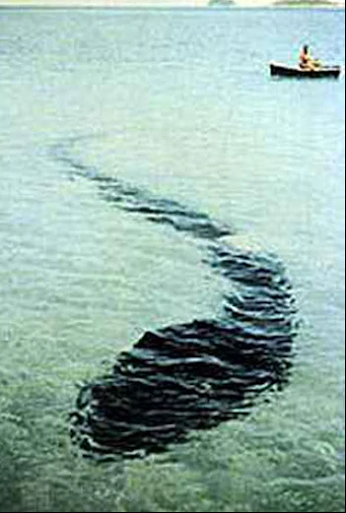 Yet another example of frogs posing unique questions to the Fortean mind is the phenomena of entombed animals. Claims dating back to the mid-19th century have documented instances of live frogs (and sometimes lizards) being freed from inside a lump of coal or a rock. This sounds absurd in the extreme; while frogs are known to hibernate encased in mud for several months, the amount of time it would take for mud to turn into rock would be far too long for any animal to survive, especially without food or water. In most reports, the frog dies shortly after being liberated from the stone. This phenomena is mostly discredited these days, but since we're still adrift in the numinous tides of speculation we won't let that concern us too much. Whether this is a 'True' phenomena or not, it provides a perfect segue for the main subject of our Froggy Night Feature: High Strangeness!

The 1955 Warner Brothers cartoon "One Froggy Evening" may seem at first glance to have nothing to do with Forteana or High Strangeness. It's a weird premise for a cartoon, but it's a classic and a very funny one. The plot shows a construction worker at a demolition site who discovers a time capsule in the cornerstone, in which there is a living (and very lively) frog. The frog then proceeds to dawn a top hat and perform a song and dance with a cane. Michigan J. Frog can be interpreted as an "entombed animal". There is evidence to suggest this cartoon was inspired in part by the tale of Old Rip the Horny Toad, a horned lizard that allegedly survived being kept in a time capsule for 31 years in Eastland, Texas. Chuck Jones, the legendary cartoon director who managed this particular piece, gives the credit for the character and plot to his friend, writer, and gag man Michael Maltese in his autobiography Chuck Amuck. "The quirky brilliance of his ready wit was never neutral.", he said of Maltese; "He disdained facts as useless-- only the odd, the unusual, the hilariously peculiar interested him." Regardless of Michigan J. Frog's provenance within the varying fields of the weird, we can use him as a totem for how the phenomena of high strangeness acts - and how we interact with it.
After all, many of the strange events that those of us who have an interest in such things research really are "hilariously peculiar", which has in recent years led to fertile grounds for jokes on paranormal podcasts. A great many UFOlogists over the decades have dismissed the cases that seem too "out there", or omitted the laughably strange details from reports in an effort to present the case seriously. This applies also in ghost hunting and cryptozoology; often the desire for the case to be presented as worthy of honest investigation means it must be trimmed of anything that makes it sound too bonkers. Worse still, witnesses will fail to report the exorbitantly strange details of an event, even if they will generally share that it happened.
So what are we to do when we encounter the Singing Frog of High Strangeness? The events of the cartoon show us a few possibilities, each of which is echoed by examples through the history of investigations into the very weird. The Worker, who is never named, initially thinks only of the money to be made off of such a discovery - only to find that the frog will not dance on command for others. Hucksterism, grifting, and opportunist entrepreneuraliasm are rife within the history of all manner of weird subjects, as is the unrepeatability of odd effects. Places famous for their monsters see a lot of tourism purely for that reason, which is all the more reason to promote the mystery. It's not surprising that some who possess a Singing Frog would seek to profit from it, and although they sometimes do, they never really can prove that it's genuine. A good deal of experiencers and researchers have had their hopes of cashing in or even just getting recognition dashed to pieces by an uncooperative phenomenon.
Witnesses to genuine events are met with doubt because of the fleeting nature of weird phenomena. Like a frog that only dances when no one else is around, witnesses can only describe the experience, not reproduce it. They generally have to be taken at their word without evidence to bolster it. The average person is not generous enough to do that, and although a lot of these ideas are becoming more mainstream they are likely to be shown the door- just like the Worker when he brought the frog to the Talent Agency.
The mind-bending weirdness of some of these accounts is exemplified well by the "diabolical frustration", as Jones put it, that Michigan drives the Worker to. He rents a busted old theater, fixes it up and invites the public to come see. No one is interested until he puts a sign out that says "FREE BEER", and - alas! - he is unable to open the curtain in time for the crowd to see the frog sing. Where one man sees an extraordinary, phenomenal miracle others simply see a mundane, croaking frog... and they proceed to pelt him with fruits and vegetables. It all feels reminiscent of the revelatory claims in the ever-impending but never arriving government Disclosure of UFOs, or any bold pronouncement of conspiracy theorists. The average person has to be bribed into caring at all, and the reasonable among them will scoff when results fail to appear. Likewise, some phenomena seems awfully performative while at the same time very particular about its audience. The Worker in the cartoon is a lot like "repeaters" in UFOlogy, or those who have many varied stories of otherworldly encounters. For whatever reason, there are those seemingly genuine people who attract strangeness, or are perhaps more cognizant of it- but not in a way that can be confirmed by others. Diabolical frustration, indeed. 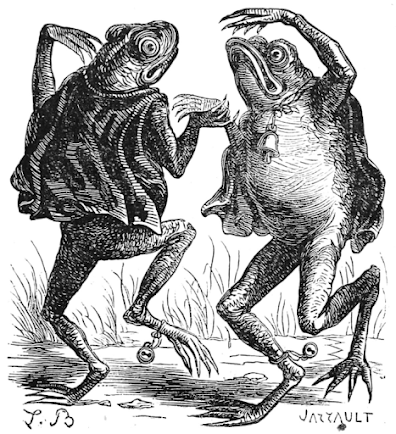 Incidentally, there is a precedent for diabolical dancing frogs- as illustrated here from the 6th edition of J. Colin de Plancy's Dictionnaire Infernal. Frogs were often associated with witches, and thought to be demons posing as frogs. Also, frogs were thought to be potent ingredients in magical workings.
"One Froggy Evening" in this sense becomes a cautionary tale about how best to interact with a bizarre, highly strange situation. Perhaps the funniest moment comes when the Worker, now destitute and miserable, sits on a snowy park bench while Michigan belts out "Largo al factotum" from the opera The Barber of Seville. This attracts the attention of a police officer walking the nighttime beat. The cop, investigating the loud singing, is flummoxed by the Worker blaming it on the croaking frog. He is then left with no choice but to drag the man off to the Psychopathic Hospital, where Michigan continues to serenade him.
The funniness of this scene has a much darker correlate in the avenues of investigating, researching, or simply living with highly strange events or circumstances. It really can drive one crazy, or at least lead outsiders to assess a witness as such. People of all walks of life can become obsessed, entirely invested in proving their claims or in more tragic cases, seeking help. Many anomalies seem to exist to fulfill the function of being anomalous; many mysteries will never be solved. Trying even at the expense of one's well-being to be the one who solves these mysteries is a path that often leads to madness. A good deal of witnesses and experiencers become ostracized from their communities, lose their jobs, and have their lives turned upside-down by the act of telling the truth as they know it. Some of them are likely lying, or mistaken, or cognitively disadvantaged. The fact remains, however, that strange encounters really do change people - for better or worse.
The cartoon ends with the Worker seeing the opportunity to ditch the box with Michigan J. Frog in it at a construction site, and it goes right back into a cornerstone. 101 years later, the Future Worker once again liberates the Singing Frog and the cycle starts again.
The diabolical frustration and madness of what can broadly be called The Phenomena is contagious, and the old stories appear over and over again with every new generation of Forteans, UFOlogists, ghost hunters, legend trippers, and weirdos. Our reactions to it may change, and that is for the best. How different would it have been for the Worker to just take the frog home and enjoy the song for himself? It would have been a boring cartoon, but the Worker would have been better for it. There's no right or wrong way, necessarily, to engage with weird stuff when it happens to you. There is perhaps a way to interpret your experience in a way that is deeply personal- and that means it doesn't need to be widely shared, or proven. Some phenomena is meant for you and you alone; you may watch the frog sing, but don't let it break your mind!