From Brooklyn to Neptune: The Bugs Bunny / UFO Connection! 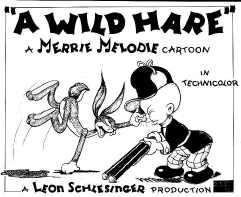 On July 27, 1940, Bugs Bunny appeared for the first time in movie theaters in the Tex Avery directed cartoon A Wild Hare. Earlier versions of the cartoon rabbit had appeared before, but in Looney Tunes cannon, this cartoon is officially Bugs' debut. Eight years later, he'd become the first living thing to visit the Moon in the cartoon Haredevil Hare, and also the first to meet an extraterrestrial. One of the most popular and enduring characters of all time, with a career spanning 80 years, he leapt from the screen and into our collective psyche during World War II with his signature question "What's up, Doc?" By the end of this article, you'll be asking the same.

Haredevil Hare was released on July 24, 1948 - 13 months after Kenneth Arnold's UFO encounter that popularized the term "Flying Saucer". The saucer zeitgeist apparently had not reached Chuck Jones and his team of animators and storyboard artists, as both Bugs and Marvin Martian (in his first appearance) arriving on the Moon in rocket ships. The cartoon is memorable as Bugs arrives just in time to prevent Marvin from blowing up the Earth with a "Kaboom" using his Illudium Q36 Explosive Space Modulator. (Illudium seems to be a fascinating and versatile fictional element - In Marvin's third appearance, 1953's Duck Dodgers in the 24 1/2th Century, Daffy Duck in the title role of Duck Dodgers is sent to Planet X to obtain Illudium Phosdex - the shaving cream atom.) As such, our intrepid rabbit hero becomes the savior of our planet, thwarting our would-be destroyer. The return of the Martian menace, however, is where the story gets really weird.

Bugs Bunny is loved around the world, but how does he rate in the farther reaches of the solar system? If we're to believe the contacts via channeling, message board, and radio by George Hunt Williamson and his associates Alfred Bailey and radio man "Mr R", we can be confident that Bugs has fans at least as far as Neptune. Williamson is a problematic and controversial figure in the weird world of 1950s contactees. His association early on with the far-right fascist William Dudley Pelley should be borne in mind; his sketchy archaeology "credentials" and the dubious ancient alien theories that came as a result along with his promulgation of conspiracy theories about "International Bankers" should give anyone pause for caution. He was, however, very influential on flying saucer culture, for better or worse. He and Bailey were both present when George Adamski allegedly met Orthon, and though they had a falling out almost immediately thereafter, Williamson continued to back up Adamski's account of events with only minor variations. Adamski and Williamson differed on the value of contracting space people via channeling or radio; Adamski seemed to recognize the ambiguous and possibly trickster-ish nature of entities contacted this way while Williamson seemed to wholeheartedly accept the messages he received from virtually every known planet, although he was warned against talking to the evil beings from Orion. With that background information out of the way, viewed in isolation, the following anecdote is a fun and interesting ride.

On September 20, 1952, at 8:30 p.m., the following message was received via 'the board' (similar to an Ouija board) from Zo, an intelligence from Neptune:

...We have impressed you from time to time, and will continue to do so. Now what I am about to tell you will seem foolish. It is the way we do things at times. This is so it will all appear in a most conventional manner. You were impressed to go and see a certain motion picture. You did not know that the cartoon was Bugs Bunny in 'The Hasty Hare'. We mentioned Bugs Bunny to you several times before, but you thought it was foolish and did not enter it into your records. We had our reasons. This cartoon was about a flying saucer and its coming to Earth. You saw the letter held in the hand of the saucer pilot and you noticed that its date was 9-27. This date is important in 1952. You will see! 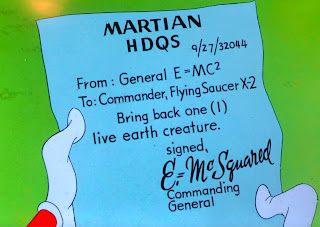 The Hasty Hare had been released a few months prior, and was the second appearance of Marvin Martian, although at this time he still had no name. It has been noted by Robert Anton Wilson that Bugs is the first alien abductee, this cartoon predating the Betty and Barney Hill encounter by nearly a decade. As noted by Zo in the above message, Marvin has also traded his rocket for a nifty flying saucer! 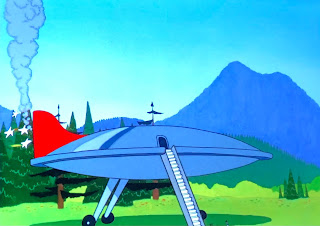 An amusing feature of Zo's message is the recognition of how absurd the Bugs Bunny connection is. He seems to apologize upfront for the "foolishness" of it, and also seems to chide Williamson et al for not recording the prior messages about the cartoon hare. "It is the way we do things at times", he says; and that does seem to ring true of UFO stories of all kinds. The Trickster element of unbelievably silly things, things that even Williamson would be reticent to share, thrown in with messages of dire consequence has that quality of being too weird to be fake. As alluded to, the saucer contacts are capable of telepathy and are well aware of what was recorded and what wasn't. They are also capable of 'impressing' those they wish to, controlling them in a way or psychically guiding them to see a cartoon at the local theater. It all seems to be a very elaborate and silly way to convey the importance of the date 9-27-1952.

Isabel Davis, in an article entitled Meet the Extraterrestrial (Fantastic Universe Science Ficion, Nov. 1957) makes sure to mention the Bugs Bunny connection when addressing Williamson's contacts. Davis, a highly respected Fortean and UFO researcher of that time, picks apart the various books of Williamson and other contactees in this article. "What is unquestionably revealed to the reader, with painful clarity," she says, "are the intense, tragic fears that haunt the apostles and disciples of the contact-communication stories. Many passages are an almost rhythmic see-saw between terrors- of war, of soil sterility, of strange weather, of the atom - and feverish reassurances that the space beings will somehow give protections from these dooms."  Like Bugs Bunny swiping a dangerous Illudium Q36 Explosive Space Modulator away from a Martian whose view of Venus has been obstructed, the saucer folk always seem to be arriving just in time to save us from ourselves. This is certainly true in the chronicles of Williamson's contact, recorded in his book The Saucers Speak! A Documentary Report of Interstellar Communication by Radio Telegraphy. There's an urgency from the space people that time is short, that they must act quickly if we are to be saved. But there's always time to watch a cartoon.

So what was so important about the 27th of September? For Williamson, Bailey, and "Mr R" it was the communication that arranged for them to finally meet their space contacts, face to face. At 5:30p.m. they were informed that their space friends were passing over Winslow, AZ, where the radio shack was located. At 5:55 p.m. they heard the craft fly over and saw them in the distance. It was also their "first and last contact by radiotelephony". Before and after the 27th, all radio contact was done through ham radio code that had to be transcribed by the very adept "Mr R". The one audible transmission was only barely so, according to their account. "It seemed a speech was being given in a large auditorium. The static was terrible and we could only hear a word now and then. The voice was loud and masterful and spoke perfect English. There was a reference to Germany and America and that they could no longer appeal to reason, etc." The rest of the evening was spent deliberating with the space people whether they should bring "Mr R"'s debilitated father-in-law to the saucer landing the next day, and the verdict was "No." Ultimately the meeting didn't happen, as logging trucks had kicked up a bunch of dust and separated the would be ambassadors to the stars...

Surprisingly, some notable UFO sightings did happen elsewhere that day. In Hempstead, Texas, USAF pilots reported seeing silvery, disc shaped crafts moving at speeds in excess of 600mph. Later that night in Inyokern, California, two couples viewing the night sky through a telescope witnessed a large, round object change colors as it flew on a level, straight path. If you were to go from Hempstead to Inyokern as the crow (or in this case Flying Saucer) flies, you'd pass somewhat near Winslow! 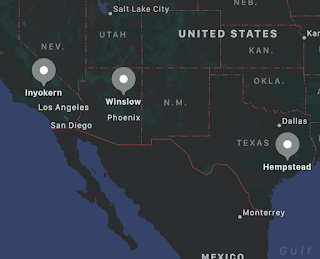 Also, relevant to the mysterious voice that mentions America and Germany - September 27, 1952 in the areas around Kiel and Hamburg Germany, a brightly lit UFO with at comet-like tail was witnessed moving irregularly through the air by personnel involved with Operation Mainbrace , the first large-scale naval exercise under NATO.
As wacky as the entire scenario is, there does seem to be some eerie accuracy involved- and that wascally wabbit is in the middle of it... In many ways, Bugs does seem to embody the Trickster which so many equate with the high strangeness around UFOs. An NPR Segment from 2008 makes a pretty good case for Bugs-as-archetypal Trickster, the mercurial rule-breaker from whose actions we all end up benefiting. As mentioned earlier in this post, Robert Anton Wilson had an affinity for the wisecracking rabbit. He joked in The Illuminatus! Trilogy that there were hidden messages in Bugs Bunny cartoons, implanted by Illuminati agents in Hollywood, based on Adam Weishaupt's comparing of a shoggoth to a cursed rabbit -  'du Hexen Hase' - 'that wascal wabbit'. Several years later he'd feel that the joke was on him, as he pondered the synchronicity of the brief appearance of Bugs in the 1977 Spielberg movie Close Encounters of the Third Kind. Wilson's own telepathic contacts with space intelligence was intimately entangled with Sirius, and the momentary clip of Bugs Bunny is one of him saying "Set the coordinates for the Dog Star!" "I thought I was kidding" Wilson writes in incredulity later. Beyond just Bugs, Wilson went down a 'rabbit hole', as it were, of bunnies in association with UFOs, which he referred to as Lepufology. 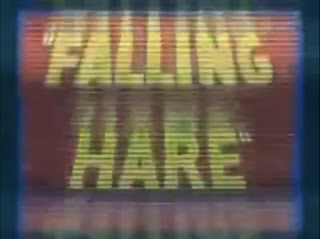 As previously mentioned in another entry on this blog, Bugs also makes an appearance during the 1977 ITV Broadcast Intrusion, just as the picture starts to come back under control. The cartoon Falling Hare, a WWII era story with the Fortean plot line of our favorite rabbit being terrorized by a gremlin. It's one of the few examples of Bugs not having the upper hand - a reminder that even the Trickster can sometimes be tricked. Sometimes we take a left turn in Albuquerque, and wind up way off course. Sometimes the mercurial nature of the Phenomena can make us laugh, while other times it can be scary and leave us wanting for a savior - be it Saucer or Wisecracking Leporidae. What's up, Doc? What's up, indeed. 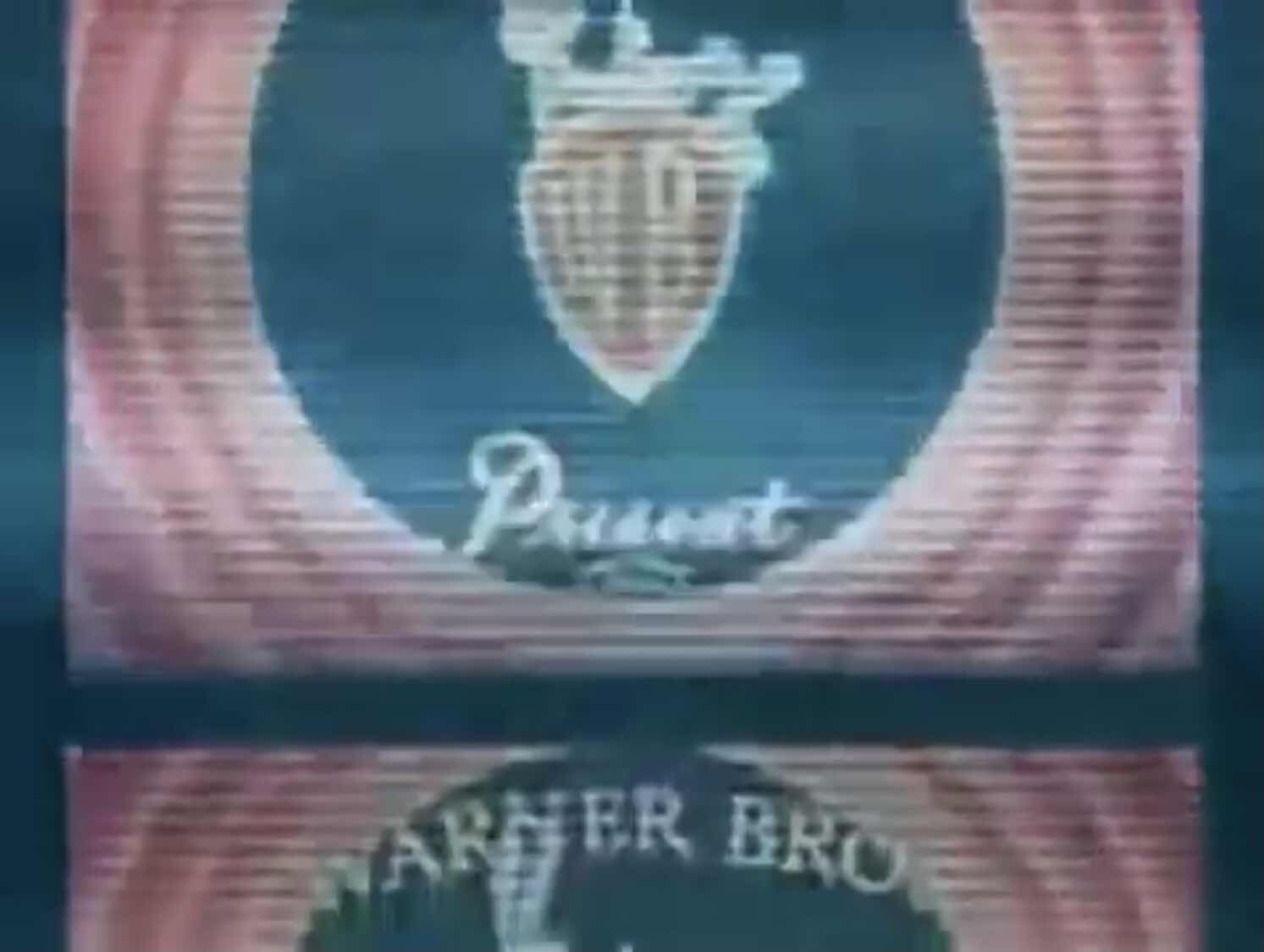